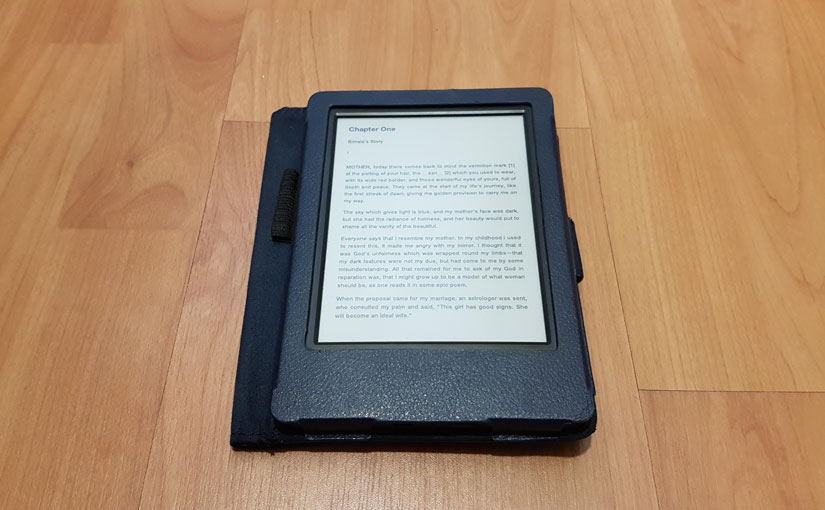 Not a lot happens in The Home and the World, but a lot is felt and thought and said. The novel explores male and female gender ideals, the changing role of women in the modern world, and approaches to political change. It showcases contrasting character traits: patience and impulsivity, thoughtfulness and recklessness, candor and cunning, generosity and jealousy, conscientiousness and ambition, practicality and idealism.

The main character, Bimala, is an Indian woman caught in a love triangle with her mild, loving husband Nikhil and the charismatic, impetuous nationalist Sandip. She has always had a place in the home, but what is her place in the world?

Four Stars
What do the star ratings mean?

What stood out in The Home and the World

The story is told from the perspectives of the three main characters. Here are some quotes arranged according to whose perspective they are from.

Some people are so like eternal pointsmen lying in wait by the line, to shunt one’s train of thought from one rail to another.

[E]ven my worst enemy would not accuse me of patience. And when Chandranath Babu went on to say: “If we expect to gather fruit where we have sown no seed, then we …”
I had to interrupt him. “Who wants fruit?” I cried. “We go by the Author of the Gita who says that we are concerned only with the doing, not with the fruit of our deeds.”
“What is it then that you do want?” asked Chandranath Babu.
“Thorns!” I exclaimed, “which cost nothing to plant.”
“Thorns do not obstruct others only,” he replied. “They have a way of hurting one’s own feet.”

My theory of life makes me certain that the Great is cruel. To be just is for ordinary men—it is reserved for the great to be unjust. The surface of the earth was even. The volcano butted it with its fiery horn and found its own eminence—its justice was not towards its obstacle, but towards itself. Successful injustice and genuine cruelty have been the only forces by which individual or nation has become millionaire or monarch.

Our work proceeds apace. But though we have shouted ourselves hoarse, proclaiming the Mussulmans to be our brethren, we have come to realize that we shall never be able to bring them wholly round to our side. So they must be suppressed altogether and made to understand that we are the masters. They are now showing their teeth, but one day they shall dance like tame bears to the tune we play.
“If the idea of a United India is a true one,” objects Nikhil, “Mussulmans are a necessary part of it.”
“Quite so,” said I, “but we must know their place and keep them there, otherwise they will constantly be giving trouble.”
“So you want to make trouble to prevent trouble?”

“Is the thing which happens the only truth?”
“What other truths can there be?”
“The things that ought to happen! The truth we must build up will require a great deal of untruth in the process. Those who have made their way in the world have created truth, not blindly followed it.”
“And so—”
“And so I will bear what you people are pleased to call false witness, as they have done who have created empires, built up social systems, founded religious organizations. Those who would rule do not dread untruths; the shackles of truth are reserved for those who will fall under their sway. Have you not read history? Do you not know that in the immense cauldrons, where vast political developments are simmering, untruths are the main ingredients?”

Sheer necessity has driven me to the pass, that to secure myself from utter desolation I must recognize all the value that I truly possess. Therefore, through the, terrible experience of suffering let there come upon me the joy of deliverance—deliverance from self-distrust. I have come to distinguish what is really in me from what I foolishly imagined to be there. The profit and loss account has been settled, and that which remains is myself—not a crippled self, dressed in rags and tatters, not a sick self to be nursed on invalid diet, but a spirit which has gone through the worst, and has survived.

No sooner is the possibility of a wrong admitted than it becomes actual, and clutches you by the throat, however you may then try to shake off all belief in it.

“I have imported Indian mill-made yarn and kept it for sale in my Suksar market, and also sent bales of it to markets belonging to neighbouring zamindars.”
“But we have been to your market, Maharaja,” the same student exclaimed, “and found nobody buying this yarn.”
“That is neither my fault nor the fault of my market. It only shows the whole country has not taken your vow.”
“That is not all,” my master went on. “It shows that what you have pledged yourselves to do is only to pester others. You want dealers, who have not taken your vow, to buy that yarn; weavers, who have not taken your vow, to make it up; then their wares eventually to be foisted on to consumers who, also, have not taken your vow. The method? Your clamour, and the zamindars’ oppression. The result: all righteousness yours, all privations theirs!”

“The freedom that exists in any country,” I replied, “may be measured by the extent of this reign of fear. Where its threat is confined to those who would hurt or plunder, there the Government may claim to have freed man from the violence of man. But if fear is to regulate how people are to dress, where they shall trade, or what they must eat, then is man’s freedom of will utterly ignored, and manhood destroyed at the root.”

[T]hose who deal in delusion end by deluding themselves, and I fully believe that, each time Sandip creates a new fallacy, he persuades himself that he has found the truth, however contradictory his creations may be to one another.

“Industry may lead to the country’s prosperity,” I explained, “but a mere desire for its prosperity will not make for success in industry. Even when our heads were cool, our industries did not flourish. Why should we suppose that they will do so just because we have become frantic?”

When, before my marriage, I used to see a brother-in-law of mine, now dead, mad with drink—beating his wife in his frenzy, and then sobbing and howling in maudlin repentance, vowing never to touch liquor again, and yet, the very same evening, sitting down to drink and drink—it would fill me with disgust. But my intoxication today is still more fearful. The stuff has not to be procured or poured out: it springs within my veins, and I know not how to resist it.

The sinking ship drags down all who are swimming round it. Sandip is just such a force of destruction. His immense attraction gets hold of one before fear can come to the rescue, and then, in the twinkling of an eye, one is drawn away, irresistibly, from all light, all good, all freedom of the sky, all air that can be breathed—from lifelong accumulations, from everyday cares—right to the bottom of dissolution.

When and why I read The Home and the World

I am reading this novel, originally written in Bengali, for my Backlist books column at Asian Books Blog.

See my Backlist books post for more on this Bengali novel.