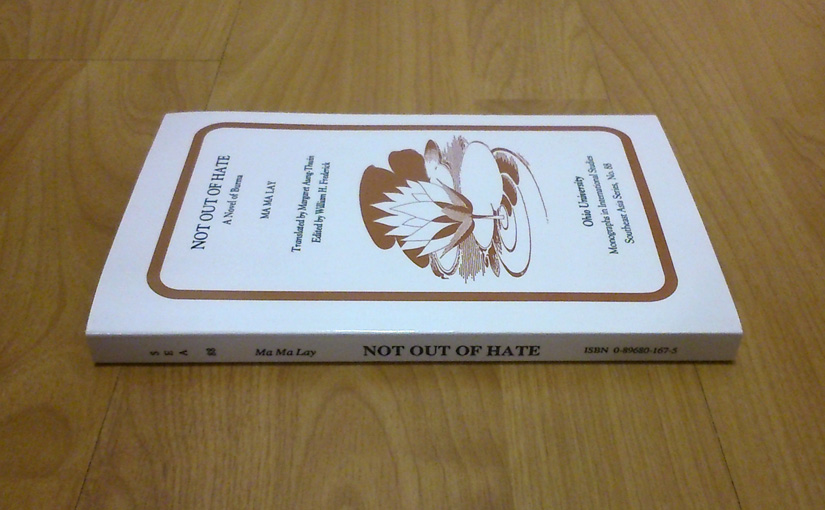 I posted some background information and opinions on Not Out of Hate in a post about the book on Asian Books Blog.

This post explains why I chose this Burmese novel to feature in my Backlist books column, even though I didn’t start out with the intent to study Southeast Asian postcolonial literature.

What is postcolonial literature?

The Wikipedia page for postcolonial literature currently argues that the designation “postcolonial” should be thought of not merely as referring to the period chronologically following colonialism, but to the ideologies that arose in reaction to colonialism.

At any rate, postcolonial literature often examines the political and cultural effects of colonization and decolonization.

Postcolonial literature would, I think, ideally be written from the point of view of the colonized. In other words, a work might be anti-colonial and yet not be considered genuinely postcolonial, as in the case of Joseph Conrad’s Heart of Darkness.

Why did I read Not Out of Hate?

My Backlist books column at Asian Books Blog features a certain kind of book. I chose to focus on books that are

I adopted the third guideline in an attempt to avoid a certain kind of low-hanging fruit: famous books written by cultural outsiders. The “obvious” book to read for the country of Myanmar is George Orwell’s Burmese Days, but no matter how anti-colonialist he was, he wasn’t Burmese. Critics fault him for the same reason they fault Conrad: being white, he was capable of sympathy but not empathy.

I still plan to read Burmese Days, but I decided it would be appropriate to read a book by a Burmese writer first. Not Out of Hate is the one I settled on.

What are some examples of postcolonial literature?

This list of “best postcolonial literature” on Goodreads includes books by Europeans and non-Europeans alike. The appreciably shorter list of postcolonial texts at Shmoop has been constructed with stricter criteria.

Both the Goodreads list and the Shmoop list, and others like them, include Wide Sargasso Sea by Jean Rhys, which supplies a dignified backstory for a stigmatized character in Jane Eyre. The work is thus a clear example of a reaction to colonialism—in this case, colonialism in the Caribbean.

At least one writer believes Southeast Asia is relatively overlooked within the discipline of postcolonial studies, but I’ve now read at least three works that could be considered examples of Southeast Asian postcolonial literature:

The Social Cancer is a problematic example in that the author, a native of the Philippines, was educated in Europe, and wrote the novel in Spanish, the language of the colonists.

Perspective is valuable. If you always go for the low-hanging fruit, you never learn what the world looks like from the top of the tree.

I could say that I come from an ex-colony myself, but the US is hardly a typical one. Certainly a firmer grasp of Southeast Asian writing would enrich my historical sensibilities. I feel I’ve at least made a start.

When and Why I Read Not Out of Hate

I am reading this Burmese novel for my Backlist books column at Asian Books Blog.