Review of Four Reigns by Kukrit Pramoj (translated by Tulachandra) 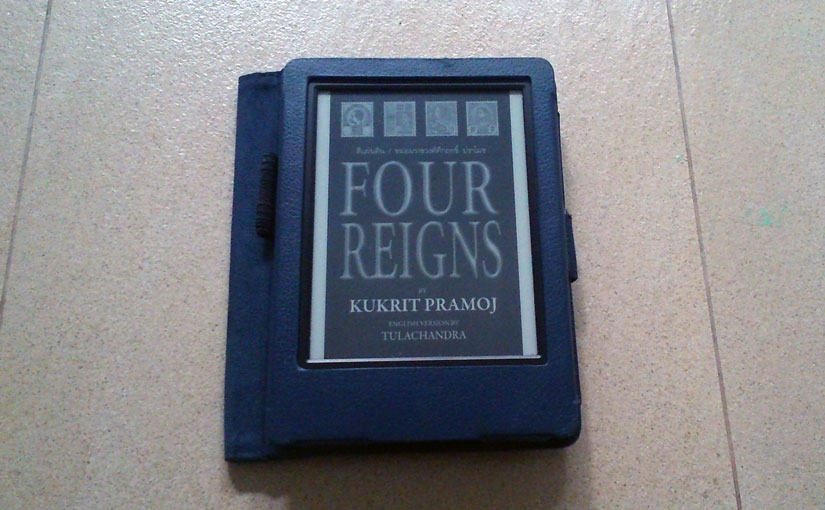 I posted some background information and opinions on Four Reigns in a post about the book on Asian Books Blog.

All their short simple names—Un, Chit and the rest—had been given them by the Chao Khun himself. Unlike some of his acquaintances, he had not asked a higher-ranking personage or a venerated abbot to do the honour, and unlike others had not chosen to confer upon his children multi-syllabic names comprising words of Sanskrit or Pali origin and often strung together to be read like a rhyme. Phloi heard him say to Mother one day that such names were for the royals, and commoners who tried to imitate them were only inviting the lice of ill luck onto their foolish heads.

This passage is interesting for its explanation of naming customs but also because we later learn that as a girl, Phloi believed the metaphorical lice of ill luck were literal, physical lice. She went so far as to inquire whether the lice of ill luck came from royal people, and whether they were different from other lice, such as the ones she had once caught from a slave girl. It’s a charming detail.

I’m like that proverbial toad who lives in a coconut shell and knows next to nothing about the ways of the world.

Reminds me of Terry Pratchett’s excellent Bromeliad trilogy, titled after the kind of plant within which some frogs live their whole lives. It’s a good proverb for lack of perspective, but I can’t think of a commonly known one in English.

It was here at Mount Kailas that Phloi saw His Majesty for the first time. He came to the fair accompanied by the young princes and princesses and their royal relatives. Phloi had been so absorbed in what was happening on one of the tiny stages that she didn’t notice people round her dropping to their knees. Choi had to pull her down, and none too soon. Raising her head after paying homage, Phloi found herself looking up at her king. He was standing so close she could have reached out a hand to touch his feet. This she did not do, nor did she dare let her eyes remain fixed on him for very long, but quickly lowered her head again. Her heart was pounding. She felt an upsurge of joy, was gripped at the same instant by an overwhelming sense of awe, and through all this
was mutely expressing her love, loyalty and gratitude. These feelings were older than she was, had been experienced by her forefathers and handed down through the centuries, and would be bequeathed by her to the children and grandchildren to come.

This account of an encounter with a royal personage is fictional, but perhaps not unrealistic. Never having lived under a king, it’s easy to see kings as part of the past—quite possibly a part of the past that was useless at best—and hard to imagine the mentality of someone who not only lives under a king but wishes to continue to do so indefinitely. The novel Four Reigns presents us with not one king but four of them, and shows them to us through the eyes of the central character, whose world we are immersed in and whose opinions we are inclined to consider if not agree with. The novel is full of explanations of Thai culture, and royalty plays a large part in molding and perpetuating that culture.

Change, for better or for worse

“Politics is progress, is civilization, is justice and therefore marvellous, some say; politics is a dirty business, others will tell you. You can put up arguments for or against either side. Politics ennobles, politics corrupts. Politics inspires you with high ideals, gives you the freedom and the opportunity to fulfill yourself, to enjoy the satisfaction of being master of your own destiny rather than having masters to arrange your life for you. Politics also sets brothers against brothers, even sons against fathers. Murders have been committed in its name and in its name great and glorious deeds for mankind have been achieved. Enduring friendships have been forged through politics and through it you can lose all your friends, your money, your liberty, your life.”

We are led to believe that Thailand was and always had been a serene monarchy until relatively recently when new “political” ideas about forming a republic took hold, in 1935 prompting the abdication of the ruling monarch. Although the idea of a monarchy impossible to be improved on stretches credulity, I sympathize with those who find large social changes uncomfortable.

At one point in the story, and in actual Thai history, there were cultural mandates regarding a number of aspects of Thai life, including clothing. One detail in the novel which is apparently not exaggerated is that Thai women were required to wear hats in public, as this practice would lead the Thais to greatness. I have as little understanding as Phloi of the mechanism intended to accomplish this feat.

This New Thai Talk was an official attempt to streamline our traditional speech style especially as regards its lavish profusion of personal pronouns (those of the first and the second person in particular), and polite endings. The official ruling would do away with the many Is and yous, leaving only chan and than, together with one lone polite ending: cha. It is impossible to explain how impossible it was for most people to refer (and feel natural when doing it) to themselves as chan  indiscriminately (or uniformly) to all and sundry and to address all their interlocutors as than, having been in the life-long habit of identifying this self of theirs variously to various people, whom they likewise personalize variously according to the others’ relationships with them—social relationship, sentimental relationship, spiritual relationship, hierarchical relationship, blood relationship; all this was taken into consideration.

I find the mechanics of personal pronoun and affix usage interesting because I am a language geek. These language reforms (and a later attempt to reform the Thai spelling system) did not take hold.

Phoem supported his sister’s decision to stay put. His anti-evacuation rationale, such as it was, went something like this: “If a bomb should fall on your head in this house, people would say, ‘Oh, how sad.’ But if after taking so much trouble to remove yourself somewhere and you got hit there anyway, people would laugh. What loss of face, eh?”

I am in complete agreement with this logic.

“It’s the very latest invention in weaponry. They call it the atomic bomb.” Phoem spoke with pride, as though it were his own brainchild. “Think of it, Mae Phloi, what we read about in the Ramakien—the Supreme Prommas Arrow that can wipe out an entire army and many other magical weapons—it’s come true in real life. What an astounding achievement!”

Maybe Orwell’s Big Brother prefigured Facebook, but a weapon in the Ramayana prefigured the atom bomb. Victory over one’s enemies is an ancient and universal dream.

When and Why I Read Four Reigns

I am reading this Thai novel for my Backlist books column at Asian Books Blog.